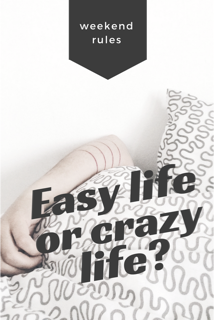 I originally wrote this post a couple of years ago, but came across it just the other day.

Reading it back, I'm amazed at how frantic my life was back then and how chilled it is by comparison now. See what you think...


First day of the school hols and I'm up with the larks...got a courier, a broken oven, a broken washing machine, a filthy house, a load of paperwork to fill in and file, 3 children, 2 dogs and a pigeon to sort out...did I mention it was the start of the summer hols???

Now let me explain...yesterday was an absolute nightmare of a day.

I had woken early, jumped out of bed and woken the kids for their last day of school for this academic year. Knowing that it was due to be a busy day, I got the breakfasts sorted, the lunch bags sorted and then myself showered.

Racing against the clock, I pulled clothes over me as I dashed downstairs only to find the kids still enjoying a leisurely breakfast.
Shocked, the conversation went a little like this:-

"What are you doing? It's quarter to nine!" I whispered, still unable to talk properly due to my tonsillectomy.

"No, mum, it's quarter to eight! You got us all up an hour early!" I was told emphatically and rather irately!!

And do you know what? They were absolutely right. So instead of just accepting this and cooling down, I then proceeded to clean all four bathrooms and arrange a courier for some books I had sold. I also phoned the washing repair man who seems to have either died before completing the job of repairing my machine, or alternatively has been eaten by sharks...because it's been a week since his last visit and still no sign of him returning.

Then [at the correct time], I took my youngest child to her leavers' assembly and sat and watched their teary performance. After this I walked my dogs and met with a group of mothers in town who were going to celebrate their children leaving first school.

Hungrily I watched them devour huge platefuls of appetising food, unable to participate due to my very recent tonsillectomy. I consoled myself with the thought that I had to leave early to collect child no. 1 from his school to attend an orthodontics appointment.

So a mere hour after sitting with the mums, I was back in the car, on route to the school once more. And what greeted me when I arrived? A truculent teenage who informed me that he was not happy to be missing the last hour and a half of school!

Annoyed now, I escorted him to the dentist where they took moulds of his teeth and raced him back to school for the final 40 minutes.

Then, passing the group of mums who were just heading back, relaxed and jolly, I set off to the next school to pick up the daughter who was finishing school that day.

At least she was pleased to see me.

We came home. Buoyed by her youthful exuberance and high spirits, I thought we would have a celebratory tea of spare ribs [I was hoping I could suck the meat off and bypass it into my throat with a lot of liquid libation] chips and chicken wings.

An hour and a half later, when the food was mildly warm but still raw, I knew there was something wrong. The oven had died. either in empathy with the washing machine or completely independently, it had lost the will to live.

It was then I went completely insane. Flinging  cooking utensils to the left, right and centre of myself, I hunted for alternative methods of cooking the foods I had promised to the kids.

Now at this juncture, most sane people would have said, 'ok, lets get a take away'. But you see, dear readers, that is where I differ from pretty much everyone else in the universe.

Like it was a personal affront to my dignity to throw away this food, I took it as a challenge that I would not be beaten over.

Throwing the chips into a wok, I proceeded to burn them into charred remnants of what they once were, whilst I undercooked [yet also managed to burn] the ribs and wings in an electric frying pan.

Thinking that it would be a good idea to make an adventure of the situation, I then [unwisely as it turned out] put all the food on a sharing platter and a whole two tins of beans in a large bowl for the kids to help themselves.

What a mistake to make! In between arguing over who got which charred rib and how many chips they each loaded onto their plates, the kids complained that this was how cowboys ate and why had I made so much washing up for myself [oops forgot to say that the dishwasher broke a few months ago too].

After the squabbling had ended and I had cleared up, I was so wound up that I decided to take my frustration out on the oven itself.

Watching me trying to heave it from its cabinet, the coolly delivered "you might want to take the screws out first" from my eldest, did not really help. Head aching and the place where my tonsils used to hang out, burning in my throat, I wrestled with the oven, trying to get it out so that I could measure its dimensions for a new one. It was at this point that I accidently yanked the oven door right off, causing me to stagger backward with the weight of it in my hands.

The pigeon watched me from the safety of it's cage as if it were I who was some rare and endangered species of bird, beady eyes alert and if I'm not mistaken, filled with humour at my situation.

It was at this precise moment in time that the middle child came and told me that the upstairs toilet was now broken.  As I strode upstairs, summer dress flowing behind me, covered in grease, grime and sweat to repair/ make worse that situation, one thing occurred to me...I left home at eighteen and since then I have lived only ten years with a man in the house...and I still don't know how to fix one damned thing!

So that's why this morning my Facebook status read as it did.

You are probably not as relieved as I am that as I write this blog at one pm, there is a man booked to come fix [I hope] the oven, the washing machine man has been located alive and well and will be back next week and I have vacuumed and tidied the house [oh and the courier has been]...did I tell you it was the first day of the summer hols...?

Posted by Carmen Capuano Writer at 06:09