Today I'd like to tell you about Jigsaw Girl.

It was a story that came to me via its main character - much the same as Split Decision did.  But that's where the similarity ends. Natalie, from Split Decision, was carried along by fate in many ways, whereas Scarlett Clarke (aka Jigsaw Girl) goes as far as to make her own fate.

I've always been fascinated by the idea of consequence. And I think that comes out fully in most of my stories. It is, after all, the thing that's at the heart of every good tale. And it fills our lives, shaping the course of our individual destinies.

Scarlett is a character who is taken to the very brink. She feels responsible for the death of the fireman who died trying to save her and unworthy of the sacrifice he gave - his life for hers. During the time I spent telling her tale I felt a voyeur to her pain. I understood her sense of unworthiness the fragility of her. But I was also proud of her, the way she found her strength, the fact that she dragged herself up in order to help her brother Charlie; that she refused to go down without a fight.

So if you see yourself in her, please take what you can from this story.  We are all of us flawed. We just need to find a way to be the best that we can. 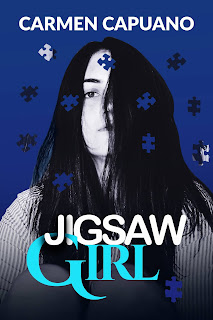 “Do you think we’ll get another dog?” he says.
I’m so shocked I stop in my tracks. “After Shadow?” Breath catches painfully in my chest and I have to force myself not to scream. “Is that what you would have done if I’d died, Charlie? Ask Mum and Dad to give you another sister?”
It’s cruel and unfair, especially as the tone it’s delivered in is acidic. None of this is Charlie’s fault and he’s only nine after all. But he can’t be allowed to think that life – any life – is so easily replaceable. That like changing a lightbulb, the light of one life can ever replace the light of another, extinguished one. It doesn’t work like that.
Not for me anyway.
But what if the end, wasn’t the end at all? What if it was really only the beginning?

Because that’s where my beginning started. At the end.

TO VIEW THE FIRST SECTION OF JIGSAW GIRL FOR FREE CLICK here.

Posted by Carmen Capuano Writer at 01:36