It's taken me a couple of weeks to catch up with life enough to be able to sit down and write a blog about my recent trip to Spain, so here it is...

You may have read about the fiasco of my previous trip to Benidorm on this blog - suffice it to say that my life is often farcical at best, so I wasn't really expecting things to go to plan on this trip. And I guess that I wasn't far wrong. Except that this time, everything was so much better than I'd imagined it could be. Indeed from the beginning to the end of the holiday, some fantastic things happened. So let me share a couple of them with you.

The first unexpectedly good thing to happen, was when we boarded the plane. Although I hadn't pre-booked our seats, we were given priority ones [lots of leg room for my growing teenagers] as well as  an invitation into the cockpit for a chat with the pilots, once the plane had arrived at it's destination. 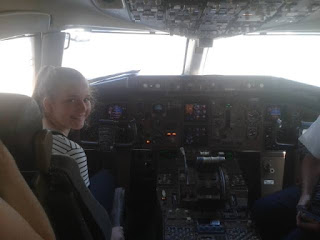 Now I don't know about you, but I've never been in a cockpit before, and so I was totally agog at the array of levers, buttons and switches presented in front of me. I'm a little ashamed to say my fingers twitched to push and pull some of them, just to see what would happen.

Unaware of my clearly psychotic tendencies, the pilot and co-pilot were exceptionally friendly, and even invited us to sit in the 'flying seat', offering us their hats to wear!

Here is a picture of my daughter Sophia in the pilot's seat.

This theme was continued when we reached the hotel, to find that a complimentary bottle of champagne had been sent to our room to help us celebrate a special occasion. Believe me, it went down exceptionally well and set the tone for the rest of our stay. 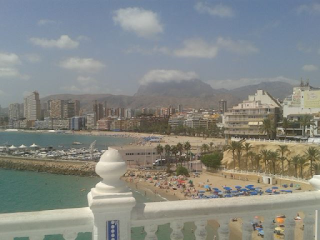 None of us could wait to get into the clear, cool water of the sea. But there was a surprise in store for us there too... little biting fish! Like the fish that were so popular a while back for removing dead skin on feet, these little fish were using us as live food!

Not painful, once you got used to them, the bites were merely a strange sensation to encounter, but the end result was truly amazing. By day two I had the softest, smoothest feet in Benidorm!

But the strangest thing of all was our return trip from a day out in Alicante.

We had travelled there by public transport, which I love to do whilst abroad. The bus out from Benidorm took around forty minutes and was a pleasant journey. As was the entire day itself.

By the time we were ready to return to the hotel we were weary and hungry. But as we boarded the bus we had no idea that this service took the scenic route, a veritable tour of what seemed like the entire southern coastline of Spain.

Inland and out we travelled, stopping at every town, village and deserted stop, on a journey that took just over two and a half hours to get from A to B! But it was in the middle of this epic journey that things got a little unusual, when a pregnant woman boarded the bus.

Now strange as this may seem, given the fact that I have three children of my own, but pregnant women make me nervous. I almost always expect them to go into spontaneous labour, upon which I will of course be drawn into helping them deliver their child. As ridicuoous a fear as it is, I find it hard to shake it.

Anyway, I digress. The woman got on with a bag and a small suitcase, which the driver stowed in the luggage hold as she boarded. Many stops later, we pulled up outside a maternity hospital. It didn't appear to be a scheduled stop.

The woman got out with her bag and walked around the corner of the hospital and out of sight. But the bus didn't drive off. Instead the driver looked at his watch, got off  the bus and paced up and down for about ten minutes.

"Perhaps we are waiting for her to have the baby and get back on the bus with it," I joked. But when the driver then also disappeared around the corner of the hospital, I began to regret my words. Ten more minutes passed and nothing happened. What was even stranger was that the local Spaniards on the bus didn't seem unduly concerned - they just waited patiently.

Maybe he had gone after her to remind her that she'd left her case, but then why had he not just taken it into the hospital with him? It didn't make sense. I didn't know what the pregnant woman was doing, but desperate to resume the journey, I was having kittens!

Half an hour later the bus pulled up at a small village and both bus driver and the pregnant woman disembarked and he fetched her case. But when he came back to his seat, she followed him back on board, made rude hand gestures to him and proceeded to hop on and off the bus, each time yelling and shouting in a rage which abated before rapidly returning. The passengers of the bus sat in an awed silence, myself included. 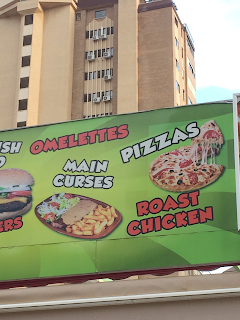 Finally having gotten all of her wrath out, she stormed off, suitcase pulled in her wake. I'll never know what it was she said, or what it was about, but I can tell you that the bus erupted with laughter and excited chatter when the doors closed and the abashed driver resumed his route. Whatever passed between him and his passengers that day will not be quickly forgotten, I bet.

So if your looking for a little local flavour on your Spanish holiday, make sure you take the local bus - just don't expect to get anywhere fast!

Oh and if ever you need to find somewhere to insult you as you are having your meal, this is clearly the place to choose.

Posted by Carmen Capuano Writer at 02:13