From the sublime to the ridiculous.

Sometimes I despair of our society - well I say sometimes, but actually it's quite often.

For a very long time, it has seemed to me and to many others, that the more we have, the more we crave, and that in some inverse need/want scenario, the less we actually enjoy those things which are the objects of our desires.

This is apparent everywhere in our consumer culture, from the frenzied rush to purchase the latest iPhone, which, regardless of cost in proportion to income, will be discarded as soon as an even better/bigger/smaller/louder/blingier version hits the shelves, to the fact that whilst cookery shows abound on TV and millions settle down to watch who will be heralded best baker or pastry chef, our high streets are filled with fast food outlets, our streets strewn with the discarded wrappers from the same outlets, and individual, non-chain shops are dying faster than the dodo.

And the answer to it all? Well according to some it's deconstruction - niche shops selling only specific items or catering for only a section of the population. A prime example of this, is those usually vibrantly displayed tobacco alternatives which have popped up everywhere, pumping their nefarious fumes out into the ozone...

But the latest trend that's got my goat, is not of the inhaling kind at all. It's of the imbibing kind.

Think of a cocktail. Its pastel or bold colours, its blend of flavours. It's pretty exotic right? Pretty awesome in fact.

Well apparently it's no longer exotic enough for our increasingly jaded tastes.

So now someone has come up with the idea of serving them in broken glasses. Deliberately designed and manufactured broken, to a precision that must make real artisan glass-blowers weep into their hands at the near profanity of the act, the glass is then filled with its intoxicating brew and served with what are apparently edible 'shards of  glass' protruding from it's center. Forgive me if I pass.

How is this high living? Maybe I'm old fashioned - hell maybe I'm just old. But I was taught to serve drinks in pristine, unchipped glass.

Have we come that far in our gluttonous lives, where every want must be immediately satiated for our juvenile sensitivities, that we can't even appreciate the most simple and unassuming things? I fear so.

And what's next? Will we be eating deconstructed shepherd's pie from stainless steel dog bowls, rendered-asunder fish pie from goldfish bowls? I hope not...but in truth I think it's only a matter of time.

So move over Fido... now where did I put that wire scourer? 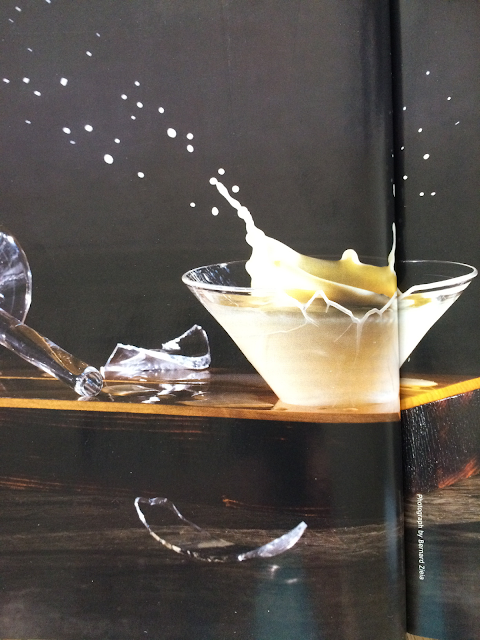 Posted by Carmen Capuano Writer at 01:31