Back then in 1984, Glasgow was a dark city. I don't mean that in a symbolic, euphemistic way. I mean it literally. The buildings were black, the streets a dark grey, the skies were grey... hell, even the faces of the people were grey.

The brash gaiety of the decade's pubs, full of themes like 'Alice in Wonderland' and 'Berlin before World War II' [and I kid you not - these were real themes in the pubs at the time] where the bar staff dressed in character, failed to raise my optimism once the final drink had been drunk and I stepped out once more into the harsh, drab reality of the city.

But in the intervening years between then and now, Glasgow has undergone a slow metamorphosis... so subtle to begin with that I almost didn't notice. One by one the old stone buildings have been cleaned of grime [sand-blasted is my best guess] to reveal the real colour of the stone below - red sandstone, rich vanilla or palest cream stone blocks, set together with precision.

And like many transformations, over time things have gathered momentum. One clean building becomes two - notable but still not remarkable - and then it's three, becoming eventually a whole street. Then the dilapidated buildings which were ill-conceived back in their heyday of the 1970's, and certainly not fit for modern purposes, start to disappear. Like the cleaning, it happens one at a time, barely noticeable, not all that significant...

So during every visit I'd look around and note the changes. Yet nothing prepared me for what I found on my most recent visit.

Like every transformation that is done piecemeal, the full effect is never realised until the project is almost completed. It is then that the process appears to speed up, and an overall effect is given. But with a project the scale and size of Glasgow, it would appear that the whole is much, much greater than the sum of its parts.

Because now Glasgow is beautiful. I mean really beautiful. Not the fading beauty of a distant past, but the shining beauty of a vibrant metropolis, full of glitz, glamour, and sex-appeal. Everywhere there are up-market restaurants, designer shops, snazzy signage on the buildings and liveried doormen.

Gone are all the awful 1970's and '80's buildings, and in their place stand fine pieces of modern architecture, in fantastic juxtaposition with the very best of the Victorian buildings. It really is a sight to behold, because each lends the other something it could not otherwise have.

It reminded me a little of an image of a wise old granddad holding the hand of his young grandchild standing at his side. Here was the steadfastness of age, the wisdom and the sure-footedness of knowledge garnered though time-worn experience; and the vibrancy of youth, the innocence and eagerness and freshness of a life not yet fully lived.

It took my breath away. And I wanted to find the official, whoever he or she was, who had the good sense and courage not to just demolish everything, but to keep all the great old structures and build a new Glasgow around and through them, involving them in the new builds in an almost organic, symbiotic way.

Perhaps even more surprisingly, there are beautiful murals everywhere. Not abstract shapes and exaggerated colours and angles which revolt the eye, but masterful, meaningful pictures full of love and hope for a better future, artfully crafted with skill and finesse.

I almost couldn't believe that this was the old drab city I used to live and work in. And the people walk about for the most part oblivious of the beauty around them. I wanted to run up to them, to shake them and make them look up at the gargoyles, the finials, the carvings and mouldings - make them realise that here were things of lasting beauty and worthy of praise. But for the most part their eyes were fixed on the Gucci handbags and Prada offerings on display in the shop windows.

But the thing which really marred my total optimism for Glasgow's future, was the number of homeless people huddled in doorways, cardboard boxes and dirty, stained sleeping bags pulled around them. The Glasgow of my time didn't have this. Perhaps one or two but certainly never the volume of current Glasgow. I think it might be even more than would be found upon the streets of London.

Certainly it appears that Glasgow has a new-found wealth... but what is also clear is that the divide between the 'haves' and the 'have-nots' is wider than ever. And by 'have-nots' I'm not taking about the people who can't quite afford the full Sky TV bundle, I'm talking about the real 'poor' - the ones who don't even have a roof over their heads.

Now don't worry, I'm not going to get all political on you, I'll leave that to those who are better qualified. But what I will say, is that I was more than a little shocked.

So Glasgow, perhaps you need to start revamping your indigenous population too, before all those people in their shiny new Christian Louboutin shoes fall over them and twist an ankle! 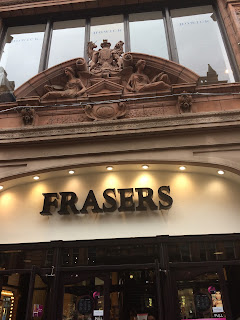 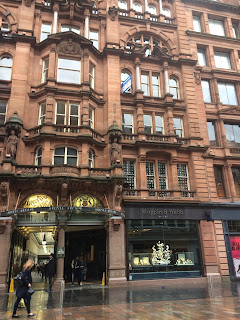 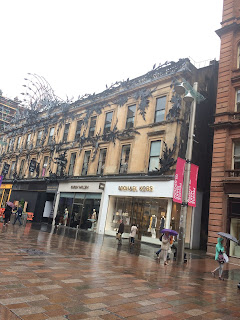 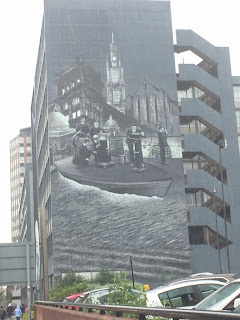 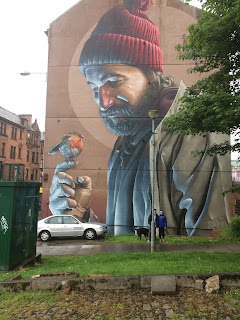 Posted by Carmen Capuano Writer at 03:32