BritAsia versus Women of the Year

As you may know, I went to both of these award ceremonies which happened within a few days of each other, and yet which were strikingly different.

Some of that difference was down to the type of awards they were, BritAsia being music based and the Women of the Year being about achievement in the fields of business and personal accomplishment.

Whilst you would expect the BritAsia awards to be more flamboyant [which they were] because it was dealing with entertainment, as well as the fact that it was an evening ceremony, as opposed to the Women of the Year, which took place in the afternoon, there were many other differences which weren't so easy to account for.

One of these [and I know I am crossing over into political territory here] was the lack of Caucasian faces at the BritAsia awards. As far as I could tell I was the only white person there. Now you might be shaking your head and thinking, 'silly Carmen, the clue was in the title of the awards Brit...Asia,' but come on readers, in this day and age where interracial marriage is so common in Britain, was there not one Asian man or woman in attendance who had married outside of his religion/ethnicity? Or not one 'white' best friend who had chosen to accompany his or her friend to the awards? Apparently not!

The Women of the Year was very different with attendees who were from all racial backgrounds sitting together. But please don't assume from this that I am advocating segregation, for I am not and never would. The point I am intending to make is actually quite the reverse.

As the possibly only 'white' person at the BritAsia awards, and indeed the only white female, I was in a rather unique position. But not once was I made to feel uncomfortable or ill at ease. The men in particular were courteous and the women charming. No one shunned me and everyone was polite and chatty. Even the gentleman in the orange suit who reminded me of my dad when he was younger [he liked to dress rather colourfully] who I very untactfully informed that, 'not many people can carry orange off but you are going a great job!' [He turned out to be one of the biggest Asian music producers and instead of being offended, he laughed and laughed and posed for pictures from the professional photographer, insisting I was included. I am only able to tell you about it now, after the embarrassment on my gaffe has allowed my face to finally cool down.]

Similarly at the Women of the Year awards I made another gaffe, asking a very stunning blonde if she was Michelle Mone [well she looked like her to me]. The lady almost collapsed with laughter before saying that no, she wasn't but that they were sitting on the same table...I spent most of the event thereafter trying to avoid catching her eye because every time I did I set her off on gales of laughter again for some reason.

At the start of this blog post I wanted to tell you about the clothes the women wore, but just like in real life I have gone off on a tangent, so I must return now. The Asian women's clothes were spectacular. There is really no other word for it. Deep reds and pastel pinks, vibrant purples and sea-deep blues - there was a dress of every colour and shade imaginable and the decoration on each gown was sublime. Beads and pearls, crystals and sequins, or embroidery with blood red threads or sun-gold ones. Each dress was better than the one before.

Sexy, cut off the shoulder, tight and fitted or swirling around like a cloud, sari and evening dress, I stood enviously looking at each one and wondering if I was too old/fat/white or indeed all three to have worn it. And the Asian women were so pretty - ok not all of them, for that would have been impossible but on the whole they were incredibly attractive with fine cheekbones and oval eyes. Funny how the men weren't as handsome on a scale of 1-10 as their womenfolk...sorry guys but there it is!

So now to the Women of the Year. Yes it was a completely different thing and of course it was during the day... but the hotel it was staged in was beautiful, the ceremony was snazzy and the food superb. But where were the elegant dresses, the clothing that might have been more appropriate to an awards ceremony than the ubiquitous black trousers and dressy top? Come on ladies of Britain, where is your style, your sexiness, your alluring attire? Where is your pizzazz?

Don't get me wrong - as I have told you often before, I am most likely to be found in jeans and wellies, hair up and no make-up on during the working week, but I do like to dress up when the occasion demands. And surely an award ceremony is one of those times?

So Britain, take a long hard look at your wardrobe the next time you are due to go out to an event. Maybe, just maybe, those trousers can take a break and that dress [you know the one I mean, the one you bought for that wedding reception but didn't have the nerve to wear] can have a turn instead.

Get behind me Ladies of Britain as I lead the charge for a more glamorous Britain, one where we can wear our diamonte drop earings and beaded dresses with pride. But until then, 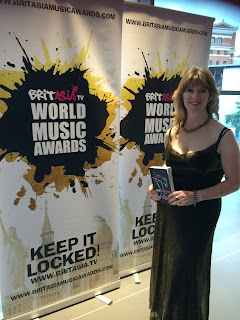 Posted by Carmen Capuano Writer at 05:54